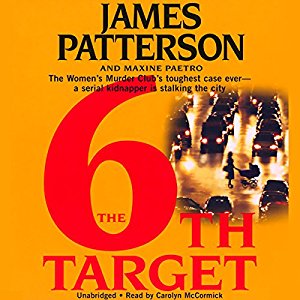 Synopsis:
When a horrifying attack leaves one of the four members of the Women's Murder Club struggling for her life, the others fight to keep a madman behind bars before anyone else is hurt. And Lindsay Boxer and her new partner in the San Francisco police department run flat-out to stop a series of kidnappings that has electrified the city: children are being plucked off the streets together with their nannies-- but the kidnappers aren't demanding ransom. Amid uncertainty and rising panic, Lindsay juggles the possibility of a new love with an unsolvable investigation, and the knowledge that one member of the club could be on the brink of death. And just when everything appears momentarily under control, the case takes a terrifying turn, putting an entire city in lethal danger. Lindsay must make a choice she never dreamed she'd face--with no certainty that either outcome has more than a prayer of success.

A Very Intriguing and Suspenseful Series.

Holy Cow! Lindsay Boxer has her hands full in this installment. Multilayered with non stop action
kept me glued, in fact, I listened to it twice just to enjoy it.

This is my favorite installment to date, Lindsay is in a mad dash to find out who the culprit is... she has a personal interest motivating her, who shot her friend? Another spine tingling twist takes place, causing me to gasp at its horrific portrayal. Mindboggling suspense drives this story forward to a terrifying and intense end.

Will the new love interest make the cut or not remains to be seen.


So cannot wait to get my audiobook of installment, #7.