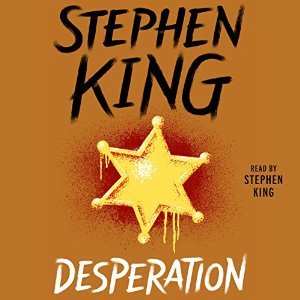 ♥Synopsis♥
Hear the voice of the author himself as he reads you one of his best-selling spine-tinglers. Lend Stephen King your ear and with his signature Mainer drawl, he will creep right inside your head to disturb your very soul.
Desperation is a little mining town, the kind of place many will enter on their way to somewhere else. But getting out is not as easy as it would seem....
Located off a desolate stretch of Interstate 50, Desperation, Nevada, has few connections with the rest of the world. It is a place, though, where the seams between worlds are thin. And it is a place where several travelers are abducted by Collie Entragian, the maniacal police officer of Desperation. Entragian uses various ploys for the abductions, from an arrest for drug possession to "rescuing" a family from a nonexistent gunman. There's something very wrong here, all right, and Entragian is only the surface of it.
The secrets embedded in Desperation's landscape and the evil that infects the town like some viral hot zone are both awesome and terrifying. But as one of the travelers, young David Carver, seems to know—though it scares him nearly to death to realize it—so are the forces summoned to combat them.
This audiobook is an absolute must for Stephen King fans, but truly a treat for anyone who just loves hearing a great ghost story told by the master of creepy.


♥What the Critics Say♥
"Stephen King's knack for turning the stray junk of pop culture into sick, darkly engrossing thrills has rarely been this much in evidence as in Desperation." (Salon)

Very Entertaining! Stephen King Can  Read to Me Anytime!

I Love Stephen King Books! What made this one really interesting is Stephen King narrated this audiobook himself. I became enthralled with the storyline and had to keep stopping it and rewind a bit because I didn't want to miss anything.

The world building is consistent, dark, and terrifying at times. I Love it!

Collie Entragian, is one hell of a character. He's creepy, sadistic, and is what drives the story. I would try to guess what he would do next... HA! He would throw me for a loop Everytime!

Great story... Go get ya some!

Lovetiggi's Book Reviews
Posted by Unknown at 8:00 AM