Cover Reveal: Wake Me with a Kiss: Regency Fairy Twists by Samantha Holt 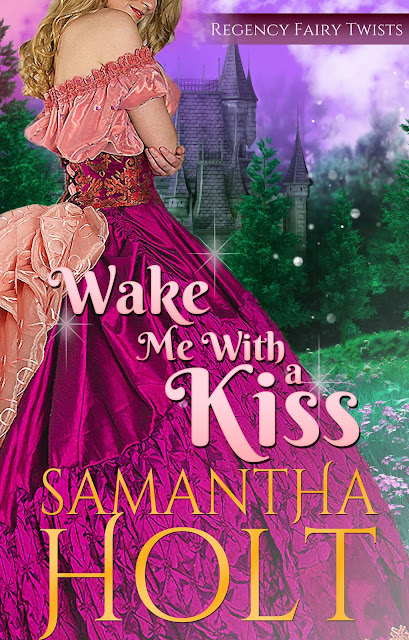 Once upon atime, in a land far, far away…well, Scotland...Rose lived tucked away from the world with her aunt. Orphaned as a baby and adopted by her aunt, she’s used toher eccentric ways—including her overprotectiveness. But Rose wants more fromlife. However, she never quite expected for Laird Hamish McTavish—complete with kilt—to change things. The brash, and admittedly braw, man is hardly like thecharming men Rose has been dreaming of.
Freshly returnedfrom the battlefield with an unexpected inheritance, highlander Hamish is struggling enough to fit in at the sleepy lowland village. When he comes across a feisty young woman with wild hair and a brash tongue on his land, he doesn’texpect it to lead to more than a five minute argument.
But he cannot helphimself. His curiosity is piqued. Who is this young woman surrounded by threeslightly-crazed elderly woman seemingly intent on keeping her from the world?He must find out more.Unfortunately,there are several people more than willing to get in the way of that aim.
Rose’s aunt for one—not to mention his late-cousin’s mistress who is determined to replace one cousin with the other. Not only must Hamish deal with his duties and find a way to get close to Rose, he must also find a way to get rid of thisabhorrent woman…before she does anything truly evil.