Release Blitz & Giveaway: For the Heart of Dragons (Dragons of Eternity, #3) by Julie Wetzel 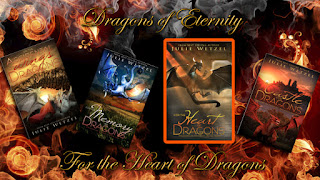 Crimson Tree Publishing presents: For the Heart of Dragons, the third installment in Julie Wetzel's Dragons of Eternity Series. 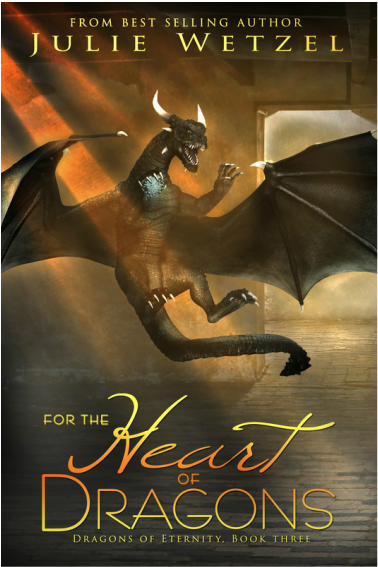 
another, but it’s a condition that usually comes on slowly and rarely
catches anyone by surprise. No one knows this better the Kara Rose,


Eternity’s leading specialist in the treatment of this condition. So
when the head of Eternity demands her presence for an emergency, she


can’t imagine what he could want. She is, after all, only a therapist.

As a top mage with Eternity, Noah Dove has worked with dragons for most of his life, so he is used to their odd quirks and physical needs. When a dark beauty shows up to disrupt the king’s celebrations, he agrees to go with her to keep the peace. When Noah is unable to protect the woman from the group killing dragons, he’s left with her last request—to save her dragon. It would normally be an impossible task, but with a bit of

magic and some help from the dragon, Noah forms the one thing that can
transfer a dragon from one person to another—a Heart Stone.

Now the dragon is loose and out of control… and the only person who can help is Kara. With Noah’s consciousness locked away beyond her reach, she must somehow find a way to soothe the dragon and connect two halves that were never a whole. The task is daunting and will push her knowledge—and personal boundaries—to their limit and beyond.

A
tiny spark of hope glimmered in the despair that was setting in.
“Come on, lover,” he coaxed, trying to get her to wake.

A
groan of pain came out as she moved.

“Be
still, lover,” Noah soothed as he pressed on the wound. He
whispered the one healing spell he knew. It slowed the bleeding, but
it wasn’t nearly strong enough to repair the damage.

Raven
let out a pained laugh as she reached up and covered his hand.
“Nothing you can do can fix this, lover.”

“I
can try, damn it!” Noah concentrated on the wound and willed it to
heal. He was a powerful mage who could pick apart trap spells and
hurl fire bolts all day long, but healing was not his forte. Knitting
together flesh was one thing, but this wound went clear to her heart.
The fact that she wasn’t dead already spoke volumes of her strength
of will.

The
use of his name drew his attention from his work, and he looked up
into her dark eyes. In the entire time he had been there, it was the
first time his name had graced her lips.

She
smiled at him. “Thank you.”

“No!”
Noah turned his attention back to the wound and pressed on it harder,
determined to save her. There was no way he was going to let her die
on him. He could feel the spell that bound them together. It was
still strong. If she were truly dying, that bond would be weakening.
She gasped in pain as he worked, but he could feel her life slipping
away under his fingers.

Reaching
up, she touched his cheek, turning his face to look at her. The
distant look in her eyes drove shards of ice deep into Noah’s
heart. “I love you,” she whispered as she stroked his skin. “Save
the dragon.” Drawing in one final breath, she shuddered as the life
drained from her.

Please note, mystery boxes are shipped to US addresses only. International winners will be offered their choice of 3 CTP eBooks in lieu of the mystery box.

On the Accidental Wings of Dragons (Dragons of Eternity Book 1) 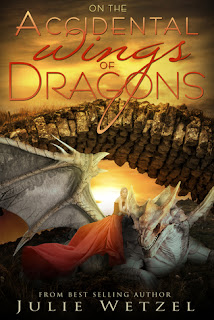 When Michael Duncan is
sent to investigate the disappearance of several dragon subjects, he
finds himself in a bind. Locked in a dungeon, his only hope lies wrapped
in a bundle of cloth tossed at his feet. One kiss and his life is
changed forever. Hunted by his own people for crimes he didn’t commit,
Michael has to learn a whole new life at the hands of a beautiful woman.
Can she help him clear his name, or will just being in her presence get
him sentenced to death?

Carissa Markel doesn’t know who this man
chained to the wall is, but he’s her only chance for escape. She has
power, but, born without a voice, she lacks the means to wield it. One
choice, made in desperation, sends them running for their lives. Does
she have the strength to help him clear his name? And what will her
brother, the King of Dragons, do if he finds out what she’s done? The
real questions is… can she keep her hands off him long enough to find
out?

For the Memory of Dragons (Dragons of Eternity Book 2) 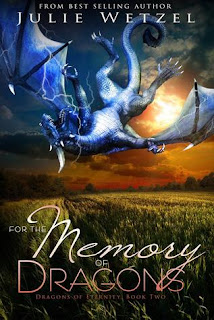 What do you do when a dragon crash-lands in your backyard?

That’s
the question Terra’s faced with when one of these creatures plows down
into her cornfield. Should she help out the hunk of a man the dragon
turns into, or turn him over to the trigger-happy ‘authorities’ that
have come looking for him? The deciding factor—he has no memory. Giving
him up just doesn’t seem right… at least until she knows the truth of
who he is.

Alex has forgotten a thing or two—his name being one
of them—but he knows there is something important that he needs to
remember, if he could just get his battered brain to work properly. A
little rest might help, but there’s no time for that when the bullets
start flying.

Now, he has to follow the few clues he has to
discover who he is, and why people are trying to kill him. But that’s
the easy part. The hard part will be keeping his hands off the lovely
lady helping him.

A Castle for Dragons (Dragons of Eternity 0.5) 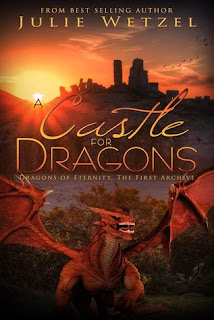 With a dragon ravaging
the countryside, the Prince of Dragons sends out his best man, Patrick
Markel. His orders—to secure an abandoned castle and stop the foul beast
from stealing more maidens. This shouldn’t be an issue for an Elite of
Eternity

But there is more going on than there seems. When other
dragons are sighted in the area, the town sends their maidens to their
new lord for protection… and Patrick’s life becomes a lot more
complicated. With the dragon he’s hunting acting odd and a castle filled
with women distracting him, how is he supposed to do the job he was
sent for? And what are the ladies going to do when they find out he’s
the other dragon in the area? 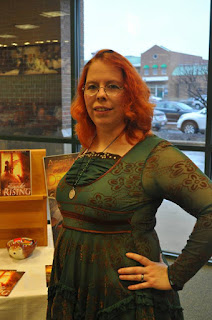 Originally from Ohio, Julie
always dreamed of a job in science. Either shooting for the stars or
delving into the mysteries of volcanoes. But, life never leads where you
expect. In 2007, she moved to Mississippi to be with her significant
other.

Now a mother of a hyperactive red headed boy, what time
she’s not chasing down dirty socks and unsticking toys from the ceiling
is spent crafting worlds readers can get lost it. Julie is a
self-proclaimed bibliophile and lover of big words. She likes hiking,
frogs, interesting earrings, and a plethora of other fun things.

Before you leave, don't forget to check out the many giveaways going on over at Clean Teen Publishing this month. Check them out here.

Brought To You By: 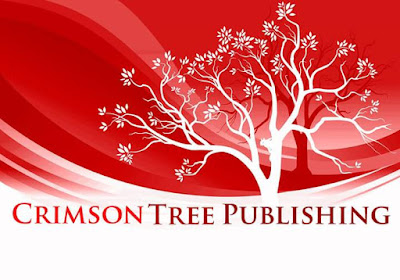 Email ThisBlogThis!Share to TwitterShare to FacebookShare to Pinterest
Labels: #3, Crimson Tree Publishing, Dragons of Eternity, For the Heart of Dragons, Giveaway, Julie Wetzel, Release Blitz, YA