Cover Reveal: A Thorne For a Crown, by Lorel Clayton CLP Blog Tours 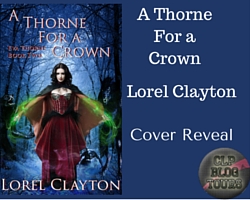 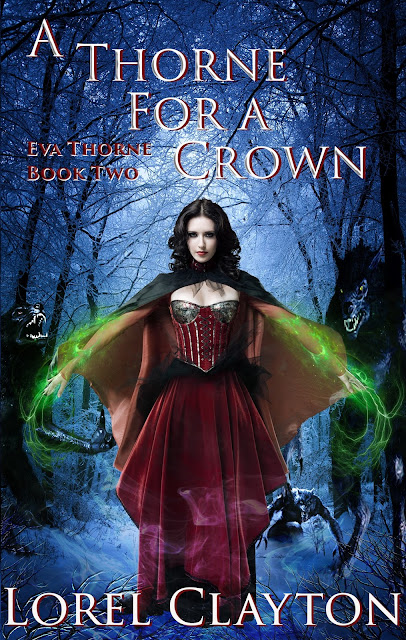 The first real case femme fatale turned private eye, Eva Thorne, has had in months may be more than she can handle. King Rutgard has been kidnapped, only he’s not entirely alive, which makes finding him difficult. What’s more, dwarf men are joining the suffragist movement in droves to win freedom from the matriarchy, and there’s a werewolf terrorist in town causing chaos. Eva needs a case like this to make her reputation, but she has problems of her own. Dark magic is rising in her, the Thorne legacy, and she can’t control it. She has to find a way or risk imprisonment by the jackbooted elf soldiers who are cracking down on illegal necromancy and worship of the Dead God. Worse, the God of Death wants her soul, as does her twin sister, so Eva denies her magic and hides from her family. But some things are impossible to hide from, like the tax collector … and love. 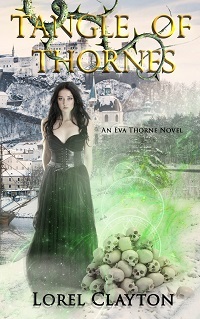 When Eva's brother is murdered in a city of rude elves and matriarchal dwarves where humans have no rights, she is forced to investigate the crime herself. What she discovers brings her up against a powerful slave-trading cartel, dark gods, and—worst of all—her twin sister. Both her family and the elven authorities want her hushed. She has no money and no magic of her own with which to combat them, but she does have an illegally-freed slave, a senile nanny, and an ex-almost-boyfriend on her side. Even when she nearly loses her job and almost loses her head in a sword fight on the same night, she isn’t deterred. It’s when the nanny goes missing that she really starts to worry.

Femme fatale turns hard-boiled investigator in this first Eva Thorne novel. Set in a fantasy world where magic and machines can't stand against the God of Death, humans are on the run from the god's invasion. Highcrowne is the only refuge, but that means living in the Outskirts of an ancient city ruled by Avian mages, indifferent dwarves, and elves who'd prefer to see humans as their slaves. It's worst for Eva's people, Solhans, because they were the ones who summoned the Dead God into the world. No one wants her kind in Highcrowne and there are plenty who would be happy to see her brother dead. There are too many motives and not enough time to unravel them, because other people are dying … and Eva is fast running out of vacation time.

"A fantastical twist on mystery, brimming with action-packed adventure and a sense of clever fun." -Elizabeth Spann Craig