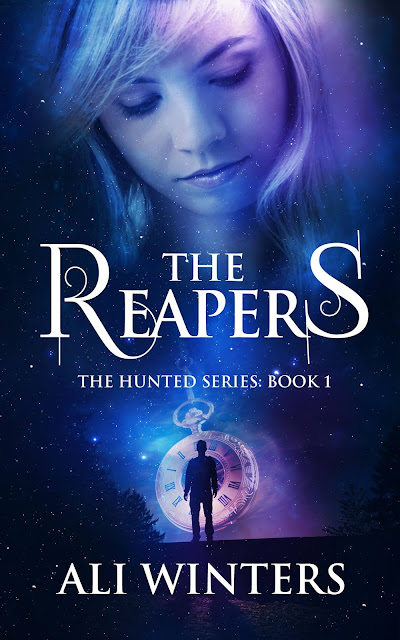 Synopsis:
The balance of life and death must be kept at all costs.
Having been a reaper as long as she can remember, Nivian knows that what she does is essential in maintaining balance. After being assigned to a rushed mark she finds that there is more to this human than any other she has encountered.
Kain had been living an ordinary life without a second thought until he meets Nivian who turns his world upside down. He is thrust into a world of hunters and reapers. The keepers of life and death have been feuding for centuries over a reason no one can even remember.
With Kain having been marked for reaping, and Nivian being hunted, they forge a friendship and together must find the truth in order to keep balance in check. Wrong choices could destroy everything. As they journey they discover hidden histories, powers, and lies and truths that have been spun since the beginning of time. The consequence of failure, unimaginable.

Excerpt:
Jumping over the edge of the bridge, Nivian landed with a soft tap on the surface of the water. She reached down, pulled the soul of the driver up by the collar of his shirt, and stood him up next to her on top of the water. She took the driver’s hand, palm up, in hers and waved her other hand over his. Pinching the air, she pulled, lifting up and exposing his life thread, his wide eyes were hypnotized by the glowing string of light. Grabbing the scythe strapped to her back she swung. With a slow, deliberate movement Nivian sliced the human’s life thread. The light formed a ball and hovered as she pulled out a small pocket watch. The life energy floated down to the watch and sunk into it, disappearing. With a snap, she closed the watch and returned it to her pocket.
“You really shouldn’t drink and drive; you could have seriously hurt someone,” she said, giving him an apathetic look.
He gaped at her, mouth opening and closing like a fish.
“Yes, you really are dead,” she confirmed as she turned away.
“Are you … the devil?” he finally managed to sputter.
“No, of course not. I am just the natural order of things,” she said, looking over her shoulder at him “Wait here. Your spirit counselor will be here soon to guide you to your afterlife. I have other jobs tonight.” She turned, walking away as she pulled her hood back up over her head and vanished.

Author Bio:
Ali grew up in the Pacific North West. She attended Oregon State University for photography. After many adventures she moved to Colorado and earning second degree, she found and met and married her husband. Ali currently lives in windy Wyoming with her husband and two dogs. When not writing Ali is either photographing, knitting, reading, dancing, or staying inside where it’s warm with a hot cup of coffee and dreaming of traveling the world someday soon.