Tabitha Michaelson: the fun loving, sassy girl who loves anything that sparkles. What you might not know is, she took an oath years ago with her brother Seth, vowing to lock their hearts and throw away the key. She has spent years keeping up the happy façade and not letting anyone get close.

It's not until a chance meeting that Tabitha meets her match in Carter Northwood.

Here's a man whose life has been filled with lies, threats, and tangled webs of disaster. Carter knows that if he takes this chance at true love, the world around him will tumble down like a spiral staircase.

Two hearts meld to form a single beat from the start. A test of trust, infinite love, and a longing for each other's passion.

Leaning back, I watch as her lips move from side to side as if she tastes them. Her head bobbles while she shifts in her seat. She’s caused me to snicker. Lord it’s been forever since a woman has had this sort of effect on me. My chest is moving up and down from the laughter.

I know once she wakes, she’ll be embarrassed by her actions. Just as I think this, her eyes fly open.

They’re as green as emeralds. That’s what I see on this side of the computer screen. I can only imagine how mesmerizing they are in person. She’s startled, off her game now as she realizes I’ve been watching. 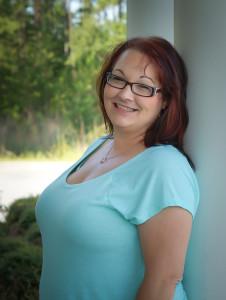 A.M. Willard is a true believer of soul mates, and happy ever after’s. She enjoys reading, sailing, and of course writing contemporary romance with some saucy scenes.  Releasing her first novella of the One Night Series on April 12, 2014 has sent her on a new journey in life. A.M.’s passion for writing started at a young age, but with the love and support from her husband of eighteen years pushed her to follow her dreams. Once she hit that first publish button, she hasn’t looked back.

Publications available from A.M. Willard include the Chances Series, Love on the Screen, and everyone’s favorite the One Night Series. She’s also had an article published in the Writer’s Monthly Review Magazine.

A.M. Willard was born and raised in the Panhandle of Florida, but resides in Savannah Ga with her husband, son, two cats, one rotten dog, and her six chickens. Yes, we said chickens…

You can connect with A.M. Willard on her websitewww.amwillard.com or subscribe to her newsletter for the latest releases, teasers and sale alerts.