I am so excited to have Claudy Conn on the blog again, she is one of the friendliest, giving, and caring people I know. I absolutely LOVE her writing style! I am SOOO loving this series... Claudy's writings inspire me to write. 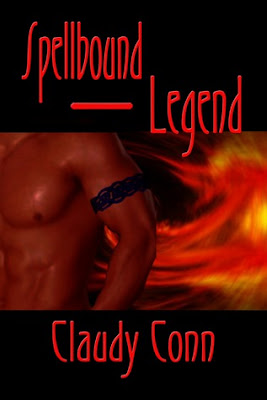 In a failed attempt to turn him into an ageless lover, the evil, not-quite-a-vampire Lamia DuLaine poisoned hunky Druid high priest Julian Talbot on his wedding day. The Seelie Fae transported Julian to their realm for treatment and captured DuLaine, but not before she brutally murdered his new wife, Maxine.

Excerpt:
He was making no attempt to hide the fact that he was studying Max in a thoroughly sexual fashion. He seemed to take it as his right. His bright eyes lit upon her full breasts, and he bit the corner of his bottom lip.
Maxie felt his eyes peel away her black sweater, and she felt a wave of heat as she realized her nipples were reacting very perkily to his gaze. She felt herself burn right up into her cheeks, but she still couldn’t speak. She also couldn’t stop doing the very same look over, taking in every incredible inch of him.
His dark blond hair was thick and shiny as it fell about his handsomely chiseled face and rested on his broad, tanned shoulders. Around his neck was a gold torque. Around his naked arm was a wide gold band, as well as a tattooed braid of Celtic knots and runes. His eyes, which at first she thought were a blast of colors, seemed to meld into silver. His smile tickled a response from her, made her want to reach out and touch his sensuous lips, as his mouth captivated her with its winsome curve.
His accent was Old World enchanting and sexy beyond belief. Maxie admitted silently to herself that when her eyes took in his firm, naked mid-section she wanted to devour him. Her eyes continued the journey and found his trim waist—and discovered that his dark brown leather pants held a bulge that would boggle any woman’s mind. Speak? Impossible! Breathe, she told herself—she had to keep on breathing or she would definitely pass out.
The prince was grinning, and Maxie could see that he was pleased with her reaction to him. He came closer, and his dangerously sensual accent tickled her senses into high gear. “Ah, you do have her look, but you are not very much like her. Your name is the same, but I think I will call you Lia.”
“Why?” Maxie squeaked.
“Lia Fail is our Sacred Stone of Destiny. Destiny is what brought us together.” He moved, and in one fluid maneuver had Max tightly in his arms. “You … like she … are able to see through my Fae cloaking. You have her gifts, but yours are somehow different.”
“Yes … different.” She sounded a fool even to herself. What would he think? Max was totally enthralled. She contemplated this, as she didn’t enthrall easily. Already twenty-one, and never before had she been enthralled!
“And you are not given …” he said into her ear. She had a weak moment when she wanted him to do much more than whisper there.
“No, nope—not given.” Her voice was hoarse as she idiotically shook her head.
“You have not yet been properly tasted and satisfied, but, my beauty … I mean to correct the situation.” He bent his head as he gently molded her body to his. His mouth sweetly covered her full lips, and his tongue invited hers to a spellbinding waltz.
He was sending sparks through her body, and she suddenly knew what it meant when they wrote about burning blood—oh yeah, burning all right.
He raised his head, and she had a job looking up that high. He had to be well over six feet tall, and Max was not much more than five foot four.
“I had to see you for myself,” the prince said quietly. “Our time is now,” he added with more feeling, and then he took her hand to lead her to the sofa.
“Yes—our time.” Oh, I’m good, really good at spontaneous conversation.

Adult-content rating: This book contains content considered unsuitable for young readers 17 and under, and which may be offensive to some readers of all ages.
My Thoughts

I was given an e-copy in exchange for an honest review. Thank you Claudy for bringing this amazing world to life. You truly are an inspiration to me.

OMG!!! I Love this Claudy's writing style, as I was reading this story I was blown away by one of the characters within; John Talbot. After coming out of a 200 year coma to a world so different than the one he remembers. He had to be trained and taught about the world as it is now. All he can feel is numb as the memories of the past haunt him... numbness turn to guilt and pain; turns to anger; turns to revenge. Powerful emotions, especially when it comes to the loss of a loved one and the realization that they are forever gone. WOW!

This story grabbed me at page one, and was so hard to put down as real life brought me back to the land of the present. .multilayered and brilliant. OMG BreslynA I want one. LOL

The characters are so vivid and their backgrounds are poetic in their descriptions, at times, I had to stop and dry the tears that were falling as I experienced them.

Maxie a young girl just coming into her own as she discovers who she really is and what it is she is called to do, can she deal with all these changes and having two HAWT DAYUM SEXY HUNKS in her life.... Oh My .. What is a girl to do? I'll never tell.

Then there is the character that I LOVE TO HATE, she is pure evil and has intentions to reek havoc on all that get in her way by whatever means she deems appropriate.

This is an 18+ Read and absolutely enthralling.... It is always FREE on Smashwords, B&N, and Amazon, so treat yourself to a very steamy, passionate and intriguing read....


Now for the Giveaway!!
a Rafflecopter giveaway
Posted by Unknown at 12:00 AM