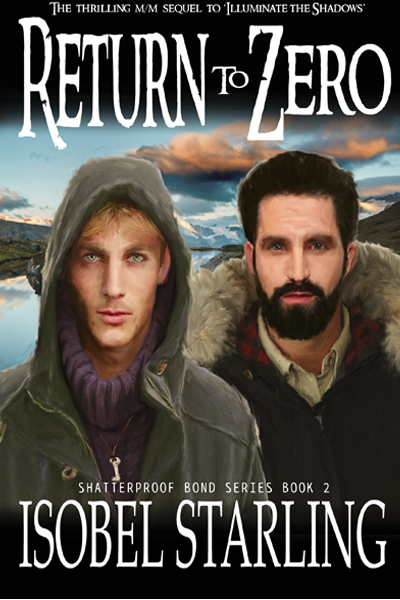 Add it to your Goodreads TBR

Pulled into a world of secrets and lies for the man he loves, Declan Ramsay’s life has changed immeasurably in the eight months since meeting, and falling for his boss’s son, Sam Aiken.  Declan journey of personal discovery is about to take a darker turn, and for Sam, the world becomes more treacherous than he could ever have imagined.

Two agents are missing -- presumed dead, while on a reconnaissance mission at an outdoor adventure centre in the Scottish Highlands.  Sir James Aiken sends his son and Declan to follow the trail, and discover the fate of the agents.
As the mission offers his first chance to use the skills he learned on the MI6 training course in Morocco, Declan is keen to get started. However, Sir James sees to it that the seeds of doubt and discord have been sewn between the couple, asBooks begin their mission.

The journey to their Highland location, and the discoveries they make when they reach the G’wan Adventures centre, prove that Sir James Aiken has been less than honest with his son.  Events in the Highlands force Sam and Declan to face their greatest fears, and understand what they both really want from life -- and from each other. 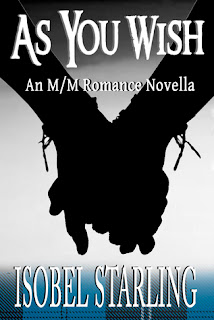 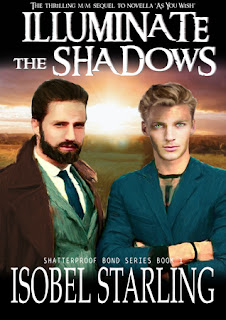 Goodreads
US Amazon
ARe

“Parcel for Samuel Aiken” The gruff male voice said. Declan peered at the CCTV image on the wall tablet screen of a courier wearing a Swift Co tabard.

“Hang on a minute” Declan replied “You expectin’ anythin Sam?” He hollered. He would not be fooled a second time. Sam sauntered out of the bedroom, bare

“Let him in,” He directed, so Declan did as he was told and pressed the button to unlock the downstairs door. Sam and Declan stood either side of the closed front door, both on edge, expecting… something. Had James sent them a message at last?

They both startled and sniggered at each other, at hearing the hard thump on the front door. Sam took a quick look through the peep hole to see the courier — a grey haired, slightly obese Asian man in his early fifties, with Fred Flintstone stubble on his chubby face. He held a package the size of a shoe box, wrapped in brown paper and tied with string, in an old fashioned way. Sam opened the door, and was immediately knocked back by the scent of sweat and cigarettes. The man smelled like he had bathed in kebabs. If this was an attempted assassination, the courier’s armpits would surely do the job. The man shoved a clipboard in Sam’s direction. He browsed the delivery note attached. The ‘sender’ address box was empty.

“Where d’ya pick this up from mate? I weren’t expectin’ nuffink,” Sam said in a rangy East London accent.

“I picks up from the depot, and delivers. Don’t know nuffin’ abaht where vu packages comes from, not my business,”

“Well, it had better not be tickin’” Sam joked, his expression gormless. The courier snickered and put the box to his ear.

“Nah, prob’ly a pair of shoes, or somefink — nice surprise from your lady love?”

“Yeah, prob’ly,” Sam mimicked. He signed an illegible squiggle, took the box, and was immediately surprised by its lightness. “Cheers mate, have a good one,” he said, giving the clipboard back, and then closing the door.

Declan observed the wall mounted tablet screen as the courier left, and the main entrance door sealed behind him. He then opened the apartment front door and checked the hallway and staircase. Nothing had been left behind. Declan felt a little melodramatic and over cautious with his behaviour, but he had a strange gut feeling that something was afoot, something that would bring more sweeping changes to his life. He couldn’t put his finger on it. Declan had felt this tinge of something ever since coming back from Morocco, like he was still in a holding pattern, waiting for permission to land. Sam didn’t seem to be unduly concerned about James lack of contact, but the past few months had seen a huge shift in the way Declan lived his life, and his self-esteem. Long hidden memories had been uncovered by the ‘interview’, and the flashes of remembrance that Declan couldn’t dare talk about, made him feel unnerved and uncomfortable.

Sam sauntered into the kitchen and retrieved a pair of scissors from a drawer filled with miscellaneous kitchen implements. He put the box on the kitchen island worktop and cut the string. There was one branded Swift Co courier label on the front of the box, and no return address. Sam made an incision at the side of the brown wrapping paper, and then cut along one side, so as to keep the adhesive tape and any fingerprints or DNA that may have gotten stuck to it, intact. He slid out a cream coloured shoe-sized box. Sam looked curiously up at Declan, who stood silently beside with his arms folded.

“Would you like to do the honours?” Sam asked witheringly. Declan held his palms up in surrender,

“Nah, yer grand. I think The Amazing Sam’s got this one” he snickered.

The box displayed no visible wires, there was no ticking sound, and the box was feather-light. Sam thought that he would feel completely foolish about the cautious way he approached opening a package if it were empty, but he’d been trained to be cautious. He returned to the drawer filled with kitchen implements, and retrieved a pair of plastic barbeque tongs.

“You know I love you, right?” Sam said dramatically, as if they were to be his last words.

Declan shook his head at the ridiculousness of the charade and pursed his lips.

“One…” Sam flicked the lid up and Declan reflexively stepped back covering his head with his arms.

“Ye said on three,” Declan whined, feeling like an idiot. Sam snickered with relief at the lack of fireworks. He used the tongs to remove a sheet of white tissue paper that covered the contents. When Sam saw what the box contained, he gasped and stepped back.

“Nothing” Sam flattened his expression and then reached to replace the lid. Declan stilled his hand, and took a look. The box held a noose made from red paracord rope. Just like the rope that had been secreted into his pocket at the Coburg Bar, nearly three months earlier.

“I’m going out. I’ve got to get this to the lab” Sam said coldly, his stare detached and light-years away.

Declan was suddenly overcome by a wave of frustration. “What the hell’s this about Sam? Jesus, I don’t even know where the fucking lab is!” he roared furiously.

Sam was shocked by the anger in Declan’s tone. He felt a prickle of guilt for behaving all ‘cloak and dagger’ with his partner — the one person he was supposed to trust. Declan had every right to know about the A.L.L lab and warehouse.

“Get dressed,” Sam directed, and then he turned and left the kitchen. 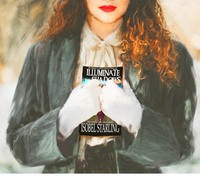 Inspiration strikes at the strangest of times.
Born in Germany, Isobel Starling spent most of her twenty-year professional career making art.  She relocated to the UK and, faced with the dreaded artist’s creative block, Isobel started to write and found she loved it more than making art.

Isobel’s first novel “Schonling” was a best seller in the GLBT-Bisexual genre on the ‘All Romance ebooks’ site.  She mainly writes M/M Romantic comedy thrillers and has just completed her sixth book.  Isobel has also signed French translation rights for novella “As You Wish”.

Isobel adores the M/M genre and enjoys writing about wounded souls and the complexities of personal relationships.  Despite not having found proof yet, Isobel believes in love at first sight and endeavors to give her men a thrilling journey and a satisfying ending!