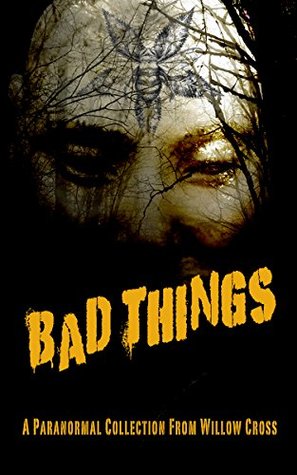 A paranormal collection
Creepy crawlies, dark shadows, hideous monsters secreted under your bed... Bad Things is a collection of paranormal stories that will make your skin crawl and heart race. Do you sleep with the light on? Maybe you should...
They come at night
When the moon grows dark
To steal your treasures
And weaken your heart
An empty bed
Is all that remains
If the Bad Things decide
To visit again
Mommies take care
Watch your young as they slumber
For babies and children
The Bad Things do hunger
Check closets and attics
And under all beds
If the Bad Things come calling
You’ll wish you were dead.

“Scott!” I yelled.
Still nothing.
Then fearing he’d totally lost it, I screamed, “Damn it, Scott!  Put me down!”
His head shook and he snapped out of it.  Dazed at first, he almost whispered as he spoke.  “Candy?”
“Put me down.”
He glanced first at his arms, then up at my face as if he hadn’t even realized he’d been carrying me.  Without any sort of warning, his arms dropped, releasing his hold.  Scrambling to land on my feet, I grabbed his shirt to steady myself.
His head careened forward and he whispered in my ear.  “He’s still back there.  I can feel him.”
I peered around him, and there at the edge of woods stood the silhouette.
“He’s there, isn’t he?”  Scott asked.
I nodded.
His shaking hands fiddled in his pockets as he pulled out his keys.  “We have to run.  We have to get to the car and get out of here.  Don’t stop and don’t look back.”
The shadowy figure took a step forward as I once again nodded.
I’ve never ran that fast in my entire life.  Not before that night and most certainly not since.  Gravel flew as he tore onto the road and as we sped away, I swear I saw the dark figure step out onto the road.
We didn’t stop at the first house, or the second.  In fact, we didn’t stop for miles.  Even if he’d wanted to stop, I think I’d have tried to talk him out of it.  When we finally entered a less rural area, Scott said, “It got Dave.  Must have taken him when we split up.”
It was only then that I realized Dave should have been in the car with us.

Willow Cross is a multi-genre author who resides in Indiana. She also moonlights as a radio talk show host for The World of Ink Network's The Paranormal Hour. A self-proclaimed vamp enthusiast, were-hunter, prankster, dreamer, story teller, benevolent dictator of minions, and chocolate lover, she spends her free time with family and friends, as well as participating in paranormal investigations.

Her home has been known to host the occasional ghost and several of her friends profess to be witches. Although she dearly loves Vampires and Werewolves, they are never invited for dinner.